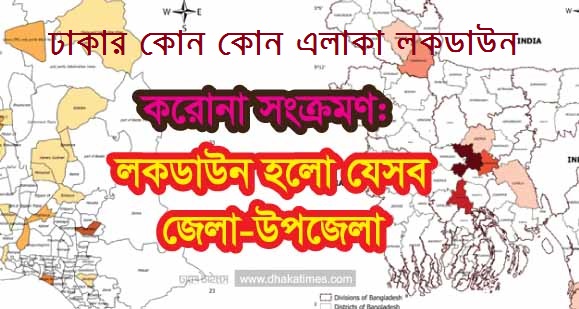 Dhaka Lock down Area lists the latest update. Two city corporations of Dhaka, multiple wards of Chittagong City Corporation, and different areas of three districts have been identified as red zones. These areas were identified at a meeting of the Central Technical Committee on Corona Prevention on Saturday. This information has been known from the minutes of the meeting.

According to the decision of the meeting, the district deputy commissioner, civil surgeon, and police superintendent will identify the red areas in these zones.

Which area is a lockdown in Dhaka

A total of 45 areas in the North and South City of Dhaka have been identified as ‘Red Zones’. Of these, Dhaka has 17 areas in North City and 28 areas in South City. And 11 areas of Chittagong City Corporation area fall in the red zone for Dhaka Lock down.

Outside Dhaka, several Upazilas of Narsingdi, Narayanganj, and Gazipur districts have been identified as red zones. The decision was taken at a meeting of the Central Technical Group on Saturday, a source in the meeting said.

Of the three districts outside Dhaka, all the Upazilas of Gazipur have been brought under the red zone. Araihazar, Rupganj, Sadar, and the entire city area of ​​Narayanganj district have been identified as red zones.

Areas in two cities of Dhaka and Chittagong where 60 people per one lakh population have been infected in 14 days have been identified as red zones. Outside Dhaka, this ratio is 10 lakhs.

Imtiaz Ahmed, Civil Surgeon of Narayanganj district, said, “In real terms, we will decide which area will be red zone.” It is not possible to lock down the whole region. The point at which the number of patients is higher will be identified. The civil surgeon said that the infection is increasing in Rupganj and Araihazar now. However, the situation is under control in the city and in the headquarters.

The minutes of yesterday’s meeting said the central technical group would co-operate to identify red zones in their areas. In addition, they will monitor the decisions of the local administration. Director-General of the Health Department Abul Kalam Azad presided over the meeting of the technical committee yesterday. However, he did not answer the phone when asked about the decision.

Mirzadi Sebrina, a member of the Central Technical Group and director of the government’s Institute of Pathology, Disease Control and Research (IEDCR), told Prothom Alo that some areas were being identified. We are cooperating in the areas of Dhaka. But the instruction is that the civil surgeons will announce themselves. We will cooperate with them. It must be controlled locally. It’s more important to decide locally. ”

Asked about the areas that have been included in the red zone at yesterday’s meeting, Mirzadi Sebrina said, “We have not published the list.” Islam. However, he came to know about the matter through the ministry. Atiqul Islam told Prothom Alo, “I have learned about 17 areas. But the areas mentioned here need to be specified. As mentioned earlier Rajabazar. Later it was seen that only East Rajabazar needs to be locked down. Now if an area has to be locked down in the red zone, I have to give it at least 48 hours. Because we need to be prepared. ‘

The lockdown of East Rajabaj of Dhaka North City has started from 12:00 PM on June 9. Besides, three wards of Kaliganj Upazila of Gazipur, Birampur area of ​​Madhabdi, and Charsundar area of ​​Palash are now locked down.